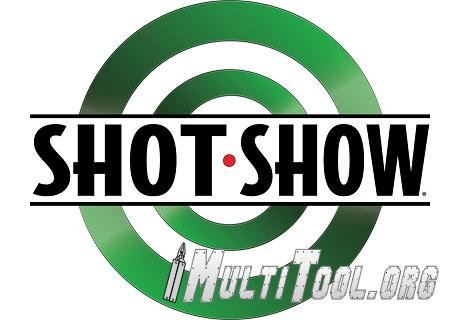 The 2017 SHOT Show (Shooting, Hunting and Outdoors Tradeshow) is just about over now and we have seen just about all that was announced there, and in case you have missed some of it on our forum, here's a bit of a recap!

As we all know, Gerber released the Center-Drive last November and the reviews for it have been somewhat mixed but quite positive overall.  I personally am a big fan of it, and Gerber has also released some new folding knives that are well worth a look.  Unfortunately, no new multitool additions to the lineup beyond the Center-Drive, but that's ok as the Center-Drive was pretty big.

SOG also showed off their new lineup, which again won't be news to Multitool.org Members as we know that SOG allowed us the opportunity to announce the SYNC II, followed by the official release of the full 2017 Catalogue in the beginning of January.  They actually unveiled the new tools at SHOT this year, and you can see our good friend (and Multitool.org Member!) Chris showing the new tools here.

The fine folks at Columbia River Knife and Tool also have some new knives out this year, but also a new breaching axe called The Rune which promises to be quite interesting.  Again, these were announced a couple of weeks ago.

Now on to the Big Guns- Leatherman has unveiled two new tools, the Skeletool KBx and the Juice CS3, which are, unsurprisingly, based on the Skeletool and Juice platforms respectively.

This is what Leatherman has to say about the Juice CS3:

The Leatherman Juice CS3 comes with a can opener, scissors, bottle opener, and corkscrew.
The Juice CS3 is a travel friendly utility tool that would make a great addition to any toiletry bag. Without an actual blade but plenty of exciting features, the Juice CS3 can make it through airport security no problem.

I am generally somewhat leery about trying to carry any sort of potentially unwelcome tool through airline security these days, but technically this one does comply with TSA rules.  You may want to look closer at each country's regulations when travelling abroad with it though.

Leatherman has this to say about the Skeletool KBx:

The Leatherman Skeletool KBx features a combo knife and BottleClip, a combination of backing clip and bottle opener. The Skeletool KBx is a lightweight, option for those on the go, with a “naked knife” aesthetic and added backer plate for stability.

Pricing on these tools is expected to be around $25, and there seems to be a variety of colors.  Having been at the helm of Multitool.org for a decade now I can honestly say that I am sure that the modders will see the Skeletool KBx as a source for parts on future modifications, and I am really looking forward to whatever they come up with.  Personally I am hoping that pocket clip will swap with standard pocket clips so that I can add a bottle opener to my Freestyle, which is one of my favorite lightweight EDC tools, despite it's limited function.

Moving on, it seems Victorinox once again doesn't have any new models per se, but they have added some new scale colors and designs for 2017 while continuing to promote the 2016 Multitool.org Multitool Of The Year winner, the Victorinox Pioneer X.

Unfortunately that is all of the news we have at the moment as I was unable to attend personally this year, but you can be assured that we will continue to pass along any and all of the info we can as soon as we get it.

More in this category: « SOG 2017 Full Catalog Leatherman Warranty »
back to top
Interested in this or a different tool and still have more questions?
Why not join us over on the Multitool.org Forum where our community can help you find what you're looking for!