Leatherman has made so many tools by now they are becoming too numerous to count, but each generation they create seems to get better than the previous, after all isn’t that what product manufacturers strive to do? They take something that the public already loves and has widely accepted and remake that item so it’s even better than its predecessors. When Leatherman came out with the Wave it hit the mulitool market by storm and soon became the “flagship” item that was the crowning achievement for Leatherman, heck even wal-mart had it listed on their shelves as “best sold mulitool”. I owned an original Wave and thought it was defiantly a forward thinking in multitool design, it was the first tool to have one handed opening blades. Having those on the outside as well as a saw and file makes the tools even with the bottom of the tool; giving the user more surface area to work with. Well in 2004 Leatherman introduced a new version of their Wave based off the design of their new flagship tool the Charge, the Wave may not be sporting a 154CM blade or Titanium handles but it’s still a contender in its own right. 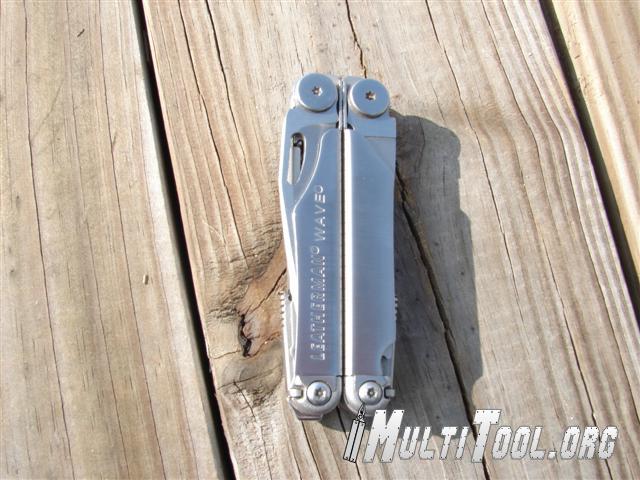 So what has Leatherman changed on the new Wave? Well the Sheepsfoot blade has changed somewhat, rather than the spine curving down to meet the blades edge there is a sharp angle to it more like something you would see off a tanto style blade. I believe this may have something to do with safety issues that might have been addressed with the previous model. The main blade has changed as well, it now sports a larger cutting area and a bigger opening hole, the main focus here was to allow a user with gloved hands to be able to open the tool without removing the glove, smart idea. No special steel is used in either one of the blades, the steel is probably a variant of 420 steel and its edge retention is not fantastic; but when you’re using the tool for dirty work you really don’t need something so sharp it shaves the hair off your arm. Two new additions to the blade system are a set of washers that make the blades open more smoothly and a new safety mechanism. When ever you have the pliers open, there is a liner in there that when the handles are spread apart a little metal tab pokes through the hole that enables you to open the blades, so it’s impossible to use the pliers and accidentally cut yourself. 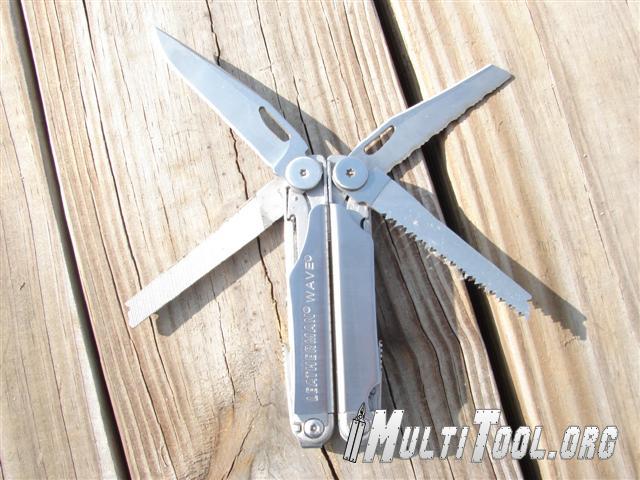 Leatherman has also increased the efficiency of their plier head by creating an oval shape to its pivot area giving it more power when really trying to tighten/loosen those bolts, not to mention cutting that wire that you really have to squeeze down on. Leatherman still to this day makes the only tool that I know of where the cutters are so finely machined that you can cut paper with them. 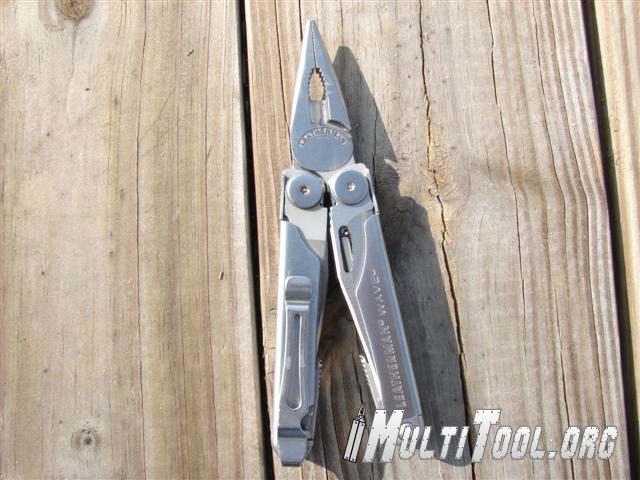 Some of the other changes the Wave has gone through are a total redesign of its tool selection, now keep in mind some of these tool changes are not necessarily for the best and sacrifice isn’t always a good thing. The scissors that we loved so much on the Wave are now replaced by a smaller set and no longer open the way they use to. We were all use to pulling on the nail nick to grab the handle of the scissors a rotating them around until they snap. There was no way you could cut yourself unless you deliberately tried too! Now however they fold out in a different fashion, you still pull on a nail nick to get them rotated out but you’re greeting with the sharp edge of the scissor blades rather than a handle. Having the scissors in this manor makes it quite possible for someone to cut themselves just by trying to cut something, and not themselves. I personally have not had a problem with this but I have heard some stories about it.

The new Wave sports the locking system that Leatherman pioneered on the Crunch, using a simple rocker lock you can now easily lock and unlock you tools with ease. It’s defiantly better and simpler to use than the roll lock Leatherman had on their SuperTool 200 and Pulse. The beloved can opener (which is one of the best in the business) is still there, they didn’t mess with that at all, and the large screwdriver is there too. But that my friends is where the similarity ends. Your multitude of different size screwdrivers are replaced by two custom made bit holders, one for large bits and the other for very small eyeglass sized screws. In theory this is a good idea, you take out the redundancy of having all those screwdrivers and replace it by a bit holder that can hold any bit you want; be it regular, torx, Allen or specialty. Leatherman has us both praising and cursing this new design. On one hand you can pop any bit you want in and out of it and not have to have a tool as wide as a Victorinox Swisschamp but on the other hand you proprietary bits that are used, you can’t just take any bit and pop it in, Leatherman has shaved off the edges of the bit to make it thinner and take up less space. The obvious downside being if you want anything other than what comes with the Wave you need to buy extras from Leatherman or a third party dealer. I have heard some very rare stories of extreme torque being used on these bit holders and having them explode causing shrapnel, but this is very rare indeed. A multitool is a substitute for the real thing and they should not be pushed beyond normal limits, if you’re going to beat on it, get a real screwdriver. 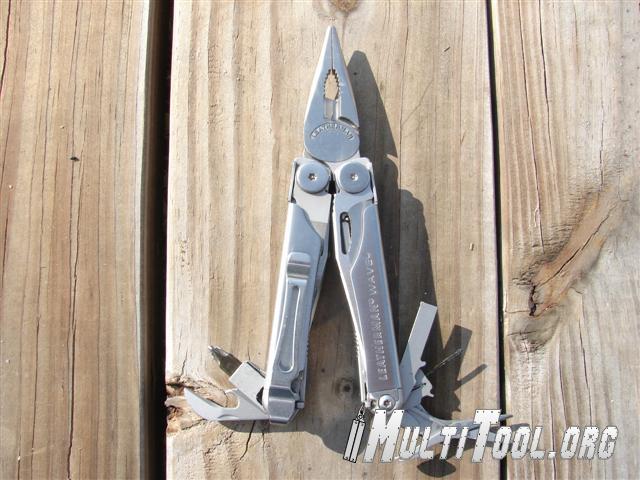 Lastly the latest and greatest change, which is my personal favorite, is that the Wave now sports a pocket clip! I was so overjoyed when I heard it had one, sometimes when you work in a job environment where work slacks or khakis are your outfit a belt sheath doesn’t go well with your wardrobe. So off with the hip sheath and on goes the clip, the new clip attaches via the end of the tool and locks in place using a small notch in the tool and the locking system itself. Making this clip removable is great as well, because some days you want a clip while other times you don’t.

In conclusion the changes made to the new Wave are both good and bad and Leatherman still has won over the hearts of thousands of tool users. They continue to innovate and surprise us with each new tool that comes out. The greatest thing Leatherman has is customer feedback, with our opinions out there; we can change the future of what Leatherman has on the production line. The Wave is a winner in my book, just wish I had the cash for a Charge! This is the poor mans alternative and it’s defiantly well worth the purchase for those of the original Wave or someone who is just being introduced to it.

More in this category: « Leatherman Surge Review Leatherman SideClip Review »
back to top
Interested in this or a different tool and still have more questions?
Why not join us over on the Multitool.org Forum where our community can help you find what you're looking for!