SOG Specialty Knives and Tools has been one of the top competitors in the multitool market for a long time. In my opinion they are second in status, with Leatherman of course being the top dog. They have come along way since their toolclip and they continue to produce models that are nothing short of unique. SOG is one of those companies however that does not release new models every year and is slower to innovate than most people in the industry today. I believe SOG has the philosophy; that “if it’s not broken then don’t fix it.”

For the longest time we thought SOG would never release anything new into the tool market. Then they totally surprised us with the release of the Powerlock 2.0. The new model was not much different than the original model but had some key features that showed that they were willing to do some innovating. The new Powerlock featured a gear cover, so the teeth don’t dig into the palm of our hands as much and what SOG calls “Piano Keys”. The keys are there to aid in preventing the tools from clumping when getting a tool out of the handles. Both designs that were introduced on the Powerlock 2.0 were a testing ground for a new breed of SOG tool they had in the works. Dubbed the PowerAssist it was to be the first tool in the world with dual spring assisted blades. Needless to say the public was divided in two; those who thought this was a cool idea and those who thought this was just a marketing gimmick from the folks at SOG. Only time would tell if the PowerAssist lived up to the hype and would help launch SOG into a future that is full of mystique. 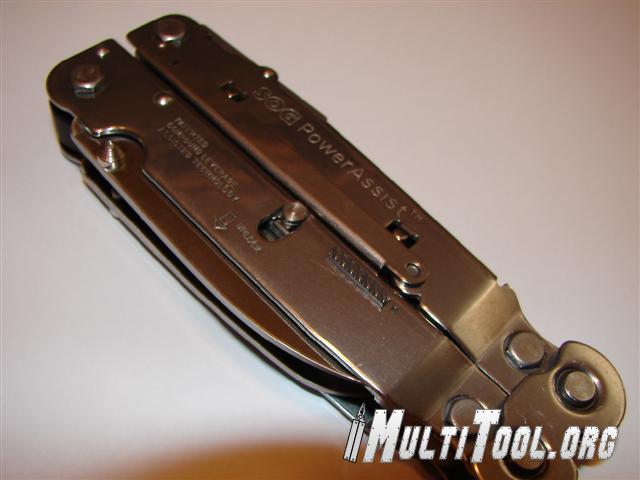 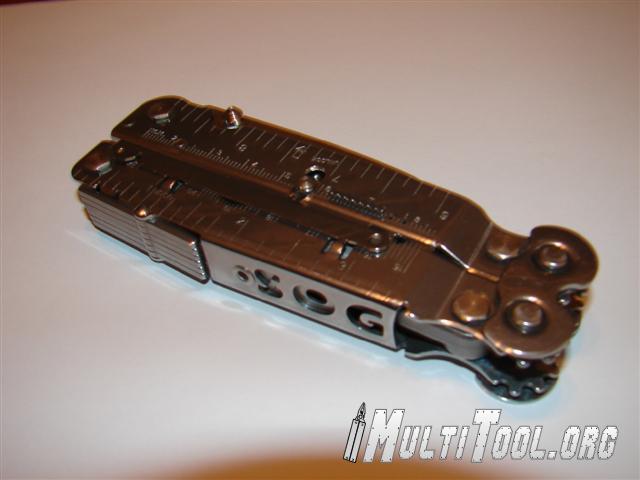 Let me start by saying the PowerAssist is a very impressive tool. Since day one I have been blown over by the quality and attention to detail that the folks at SOG had put into this soon to be “flagship” of the tool line. On the surface the PowerAssist looks very much like the Powerlock models; course that is only temporary and then you notice the huge one hand opening blades. The two S.A.T. operated blades are housed in what would be a handle full of tools. This is the paradox that is the PowerAssist; you can have all the various tools like you do in the Powerlock or you can have fancy blades that open up with a flick of your thumb. What tools are you sacrificing when you choose the PowerAssist? Well if you’re like me and don’t use half the tools in today’s multitools then you will feel right at home with the PowerAssist. In the tool portion of the handle you have a bottle opener, can opener, V-Cutter, flat head screwdriver, Phillips and a file. Overall a very good compliment to this urban breed of tool, I say urban because some key tools were left out such as the saw which would be needed for those who work in the field. 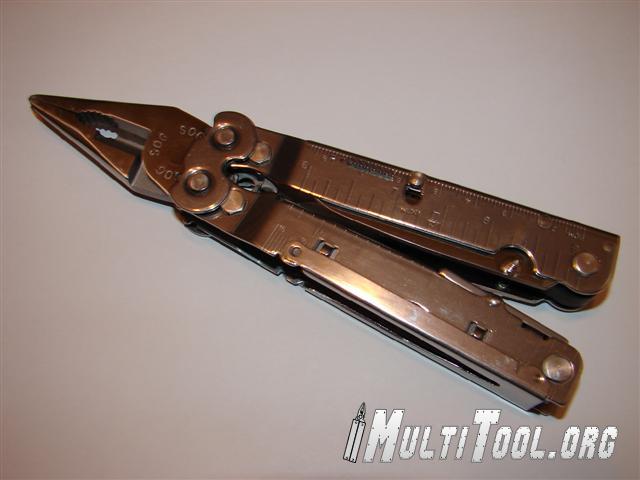 Most of all the tools pull out very nicely using the new Piano Lock system and only the Phillips gives me a hard time. The Piano Locks are a good idea and defiantly a step in the right direction for SOG. Until they start having the tools designed to use the system; we are stuck with reaching in and pulling out the tools caught in the middle. The Piano Lock system is also a little funny with its multiple keys instead of one solid locking bar. With each tool riding on an individual spring/lock you have to press that one key to unlock the tool after your using it. If your hands are rather large you end up pressing more than one key at a time because they are so small and pressure is uneven and which doesn’t work as well as a solid piece. It does works well and does the trick but is a little awkward because of the nature of the lock design. 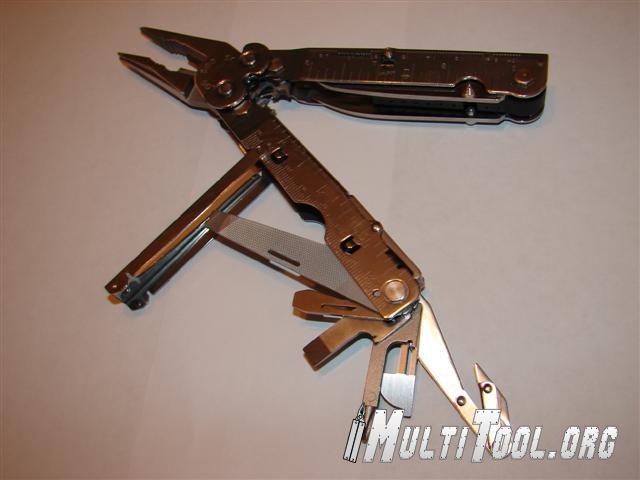 There was some attention paid to the old handle covers were are accustomed to on the Powerlock series. The old ones were simply formed sheet steel which worked well but seemed rather cheap feeling. There was a lot of flex in them and they felt like they were a last minute addition to the tools rather than something that was incorporated into it and well thought out. The new cover (since there is only one handle with tools) is very nice to say the least. The new handle covers are very nice. They are formed to fix the handle perfectly and don’t wobble or flex like the old ones. There is even a notch/catch on the handles to keep the cover from going too low when closing them after selecting the tool you need. This may not seem like a big deal to most folks but it shows SOG is really trying to hit this one out of the ballpark this time and is paying attention to the slightest detail.

The pliers are the same as those commissioned on the Powerlock 2.0, featuring a longer and beefier head. You are able to take full advantage of the compound leverage. The pliers even with their increased size are very precise. I have repaired a gold bracelet that had a link opened and the pliers worked like a charm. The head also features an extra large cutting area, more room to cut and strip anything you can throw at it. Until the Powercut comes along the new plier head it gives us the absolute best that you can find in a multitool today.

Ever used a Powerlock and have those gears dig into your hand and make you want to curse? SOG fixed the problem by adding covers to the gear heads to keep the full brunt of the teeth from digging in too much. I have used the screwdrivers numerous times and even used some heavy torque to drive screws and received minimal amount of pressure exerted by the gear teeth. This is a terrific advancement in their tool line and sure to be a hit with SOG fans everywhere.

And what you are all wondering about the whole time I am telling you all this is “what about the blades?” After all that is why you are buying the PowerAssist, right? The dual assisted blades are nothing short of awesome and definitely give the tool a wow factor. Both knives are accessible from the outside of the tool while it is in the closed position and are opened via the thumb studs. Once the blades are manually opened to a small degree the spring takes over and snaps the blade into locking position. The two main complaints about SOG’s knife blades they put on their tools was they were chisel ground and not decent knife steel. The PowerAssist solves both those issues, featuring a plain and serrated blade made of premium steel you’re able to cut with the best of them. 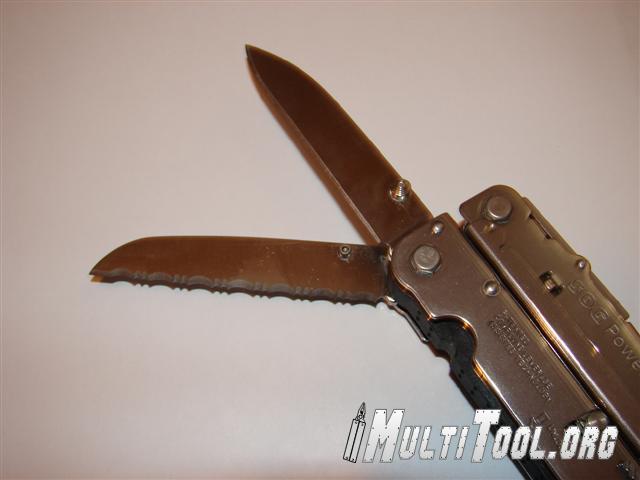 SOG has also taken into consideration the safety concerns when putting two assisted blades on the outside. For one you could not safely use liner locks and not expect it to unlock when you use a blade in a rough manner. To address this issue they use something similar to a lockback style system and you unlock the blades using a lever on the side of the handle. There is also a safety system on the locks as well and keeps the tool from flying open when you don’t want it too. You definitely feel confident using these blades and I don’t foresee a reason why you would have a lock or safety failure. To place the safety on or off you simply slide the safety lock up or down on whichever blade you’re using. To unlock a knife push the lock lever towards the outside of the tool and pull the blade closed. You can close these blades one handed but they do take a little bit of practice. So in a nut shell…….one hand S.A.T. blades on a tool; are very nice indeed!

The PowerAssist was delayed numerous times due to technical issues with the overall design. There is a lot of technology packed into this tool and it’s no wonder SOG wanted to get it right before it hit the market. I think they did a fantastic job on the PowerAssist and they did us justice by not rushing it. I think SOG is trying to define their future in the tool industry and they are trying very hard to be competitive. They have sold me on the PowerAssist and I think it’s a welcome addition to their line and to the world, of multitools. Do I recommend this tool for everyone? I think if you’re a die hard SOG fan then I would say get your hands on one, but for someone just getting into the obsession we all have here, you might want to stick to something less complicated.

More in this category: « SOG PowerLock EOD BO Review SOG PowerPlier Review »
back to top
Interested in this or a different tool and still have more questions?
Why not join us over on the Multitool.org Forum where our community can help you find what you're looking for!