I was lucky enough to first see the CRKT Flux at the 2009 SHOT Show in Orlando- and in fact, I had the designer, Tom Stokes walk me through the components. I was fascinated as Tom showed me the concept of a multitool that is customizable to your intended needs, similar to the failed Coleman Pro Lock . Coleman unfortunately did not support the Pro Lock and as a result, the Pro Lock never amounted to much. Let's hope that CRKT doesn't make the same mistake with the Flux. 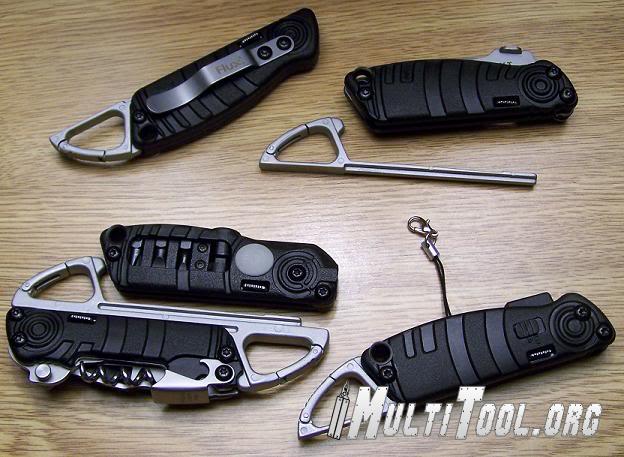 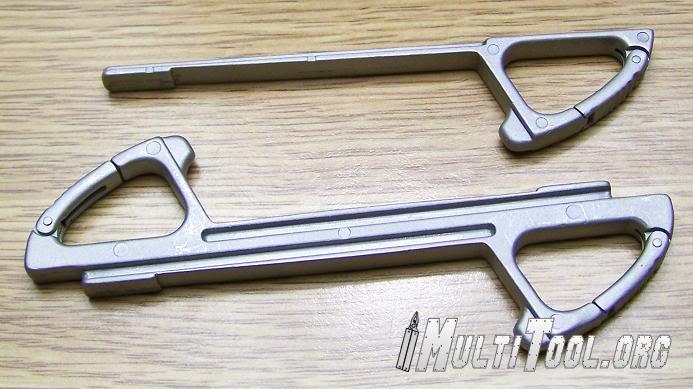 There are currently 5 different components available for the Flux, a USB flash memory module, a small folding knife, an LED flashlight module, a screwdriver with another LED light, and what they call a wine tool. Each component locks onto the chassis quite securely, and the lock is disengaged easily, allowing the tool component to be used by itself, or while still attached.

Now, a closer look at each tool component: Screwdriver & LED: 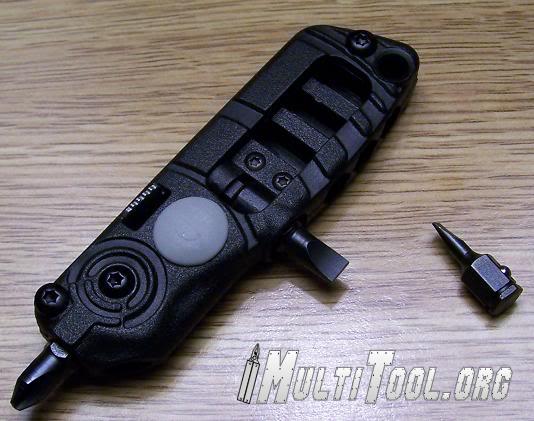 This module holds three standard sized 1/4” screwdriver bits- two different sized flatheads and a phillips bit. Each bit sits inside the body of the component, held in place with a small ball bearing. Two sockets are also built into the body so that the bits can be used either a straight or T-handle type configuration depending on your needs. Or, the driver can be used on 1/4” nuts or screws, similar to the ones used on the back of computer cases. Since the LED light is on the end next to the bit driver, it's really only useful when using the screwdriver in the standard configuration, and of course, on it's own. It's got a momentary on type switch which means it's only on while you are holding the button. Release the button and the light goes out.

Since there's always a compromise with any multitool, there's a slight downside with this one as well. One of the strengths of the 1/4” driver is that it can be used with 1/4” bits, which can be found anywhere. However, the bits that are included with the Flux have very short shanks, so while they can be used with regular bits, you can't replace them and carry standard bits as they'd sick out, and without the ball bearing, they'd likely drop out when not in use. The screwdriver/LED unit weighs in at 38.6g (1.36oz). 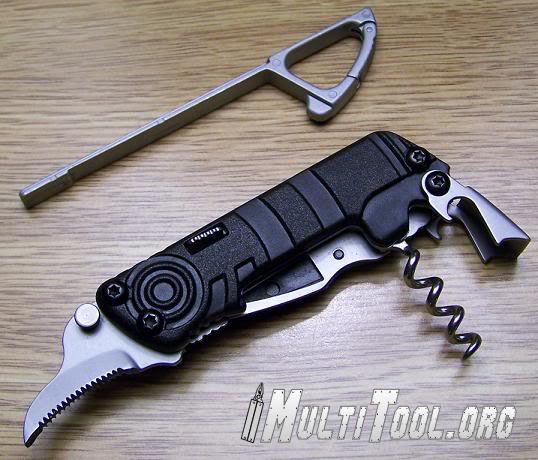 Possibly the most complex of the initial 5 tool components, the wine tool features a corkscrew, cap lifter/cork lever, liner locking serrated foil cutter with ambidextrous thumb bolt, and a pocket clip. The clip allows you to either clip the wine tool to your pocket to carry it by itself, or it can be carried on a single chassis, or on the double chassis. When on the double chassis the clip can be used to hold the entire thing in a pocket, although it would have to be a larger pocket, like those found in cargo pants. When used on a single chassis, the clip can be used to carry keys, clipped to the chassis, while the wine tool is clipped to your pocket.

The other components work as they are supposed to- the cap lifter functions as well as any other possibly could, pulling the cap off domestic and imported beers in one clean lift. The corkscrew is a worm type, and drives nicely into synthetic, natural and agglomerated corks with ease, and the lever function allows the cork to be pulled out with ease. The foil cutter opens smoothly and locks into place with a satisfying click. The only real drawback to this component as I see it is that you have to open the corkscrew to get at the foil cutter, but that's probably not too much to worry about, as this tool is designed to cut foil on wine bottles, not get into all out tactical ninja fighting. If you are about to open a bottle of wine, you probably have the corkscrew open anyway. 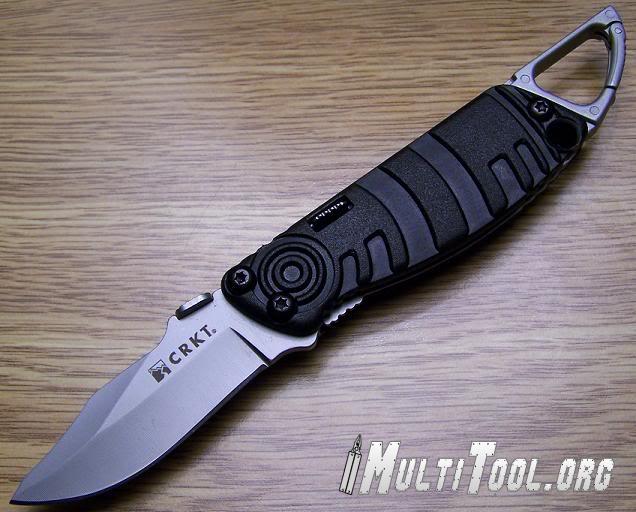 Essentially a small tactical type knife, this component features a liner locking, modified clip point, a pocket clip (see above) and a lanyard hole. The knife opens via an ambidextrous thumb disk mounted on the spine of the blade, which it textured to also act as a thumb ramp during use. I think it's a handy size, and I quite like the modded clip point, even though I'm not usually a big fan of clip points. 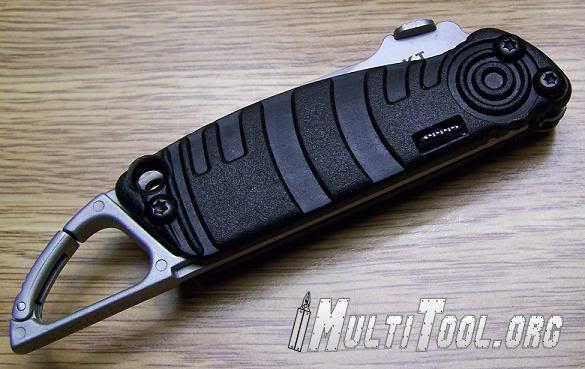 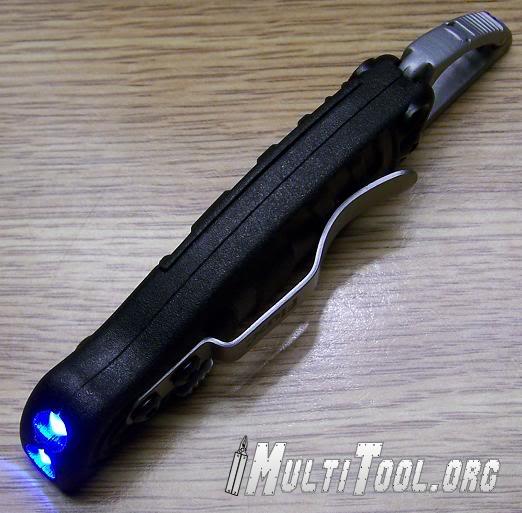 While the LED module may not be as bright as many other dedicated flashlights on the market, it is more than adequate for most functions. It's a relatively simple module with a button on one side and a pocket clip on the opposite side. In the end is a couple of LED's that are actually quite effective at what they do. While some adjustable LED lights use complex button pressing techniques to adjust brightness, this one is simple. Press the button once, and one LED comes on. Press it again and the second LED lights up as well. Press a third time, and the LED's shut off. I like this kind of simplicity in a light.

This light isn't nearly as bright as many of the other lights on the market as I mentioned earlier, but it is functional. The drawback I find with this light is that like many other lights on the market, this one is powered by watch cells. In many cases, like on the Cicada size is an issue and so watch cells are necessary. On this one, I'd like to see an easily replaced AAA battery powering it.

Lastly we come to the USB module, which I am personally quite proud of, as I actually had a hand in this one! Initially the plan was to offer a standard type USB flash drive in this module, but CRKT didn't want to limit the future usability of the component, since drive capacities increase so quickly- remember when a 128mb drive was all you thought you'd ever need?

I just happened to have my keys with me at the time, which was odd as I rarely travel anywhere with my keys (why do I need my house keys when I'm 1,000 miles away from home?) and on my keyring was a MicroSD card reader from Sandisk that I'd gotten free with the purchase of a Micro SD card some time before then. When I showed Tom the drive, he liked the idea, since the unit could be upgraded with larger MicroSD cards as needed. With cards up to 16gb readily available, and larger capacity cards being developed all the time, this component's usable lifespan has increased exponentially as a result of the portable card reader concept. So, he designed a housing around the small card reader, and it is indeed the ultimate geek toy, as it opens like a switchblade to give access to the drive!

Since the drive, and the card within are significantly smaller than the rest of the housing, Tom added in a storage slot for additional cards, but it could also be used for many of the things folks put in spy capsules- emergency cash, pills, or even a small sewing kit. These may not be geeky items in keeping with the USB drive motif, but as a tool to be used/carried every day, any of these items could prove invaluable when needed. Oh yeah, and the drive ships with a 2gb card, in case you don't have a bunch of them lying around like I do!

The USB module weights are:

With as many parts as the Flux has, it's important to come up with a method of storage so that you don't lose any components, or in the case of the USB and screwdriver modules, losing small pieces, CRKT also offers a storage case, which comfortable fits all 5 components, several chassis parts ( I have one double and four single chassis' in there comfortably) as well as an additional two pockets on the outside, protected by a flap held closed by Velcro. There's also a belt loop on the case, for those occasions where you want to bring all five modules with you. 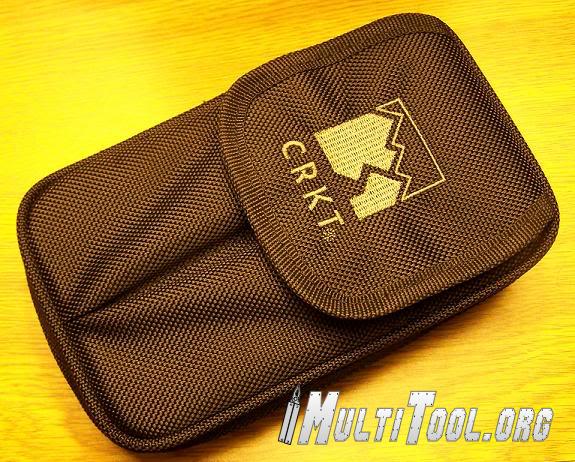 Inside the case has dense foam rubber slots to put each tool module in- in fact, they are cut out specifically for each module, so you always know where each component is, rather than pulling out two or three similar looking pieces to find the one you want. This is a nice feature, but I can't help wondering about the expandability of the Flux- this tool has excellent potential for different configurations and different functions, and while I hope CRKT pumps out a few different modules in the future, I have to wonder where I'm going to keep them? I hope this is more an indicator of a desire for “slick” packaging and not a lack of interest in expanding the lineup. 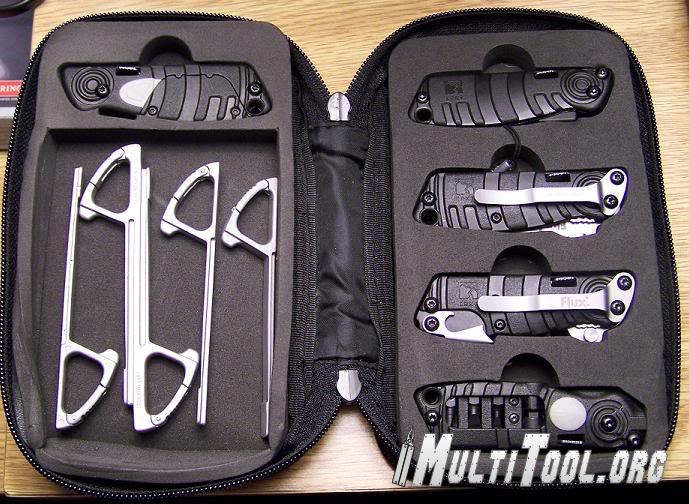 So what's the bottom line here? Simple- the Flux is a nice, inexpensive tool that can be customized to your needs in ways that no other multitool has ever managed. About the only tools that have more options than the Flux are the various models from SOG, but they aren't the kind of thing you can conveniently grab what you need and go since they require disassembly and reassembly, while the modules of the Flux just click into place. Yes, I'd like to see more options- more “tool” based components maybe, like an automotive component with space for some extra fuses and a fuze puller, maybe with a built in tire guage, or an outdoors component with a thermometer, compass, firesteel and maybe some Uncle Bill's type tweezers for pulling the inevitable splinters out.

Flux components are available either in pairs with a double chassis or alone with a single chassis. The case is sold separately from the modules. If you are a collector, you will definitely need to get one of these, as they are a fantastic addition to any collection. If you are a hard core tool user, the Flux isn't for you, but would be right at home with an electronic tech, as many of the small tools will fit nicely inside a computer case, and separate so you can attach the light somewhere and use it to light up the bays while tying to use the screwdriver to get at a not so well thought out screw placement on a motherboard or drive. Put some install files for commonly used programs on the USB module, and you have a very functional tool for that kind of work.

More in this category: « CRKT Cicada Review CRKT Eat'n Tool Review »
back to top
Interested in this or a different tool and still have more questions?
Why not join us over on the Multitool.org Forum where our community can help you find what you're looking for!